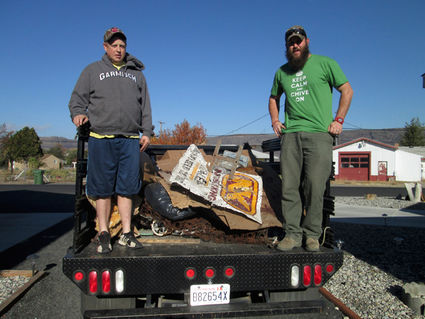 Kenny, left, and Ronnie Hearne show a pickup load of garbage they picked up at the Osborne Bay shooting range south of Electric City. The Hearnes, including the boys' father Clay, had earlier hauled another load of garbage to the transfer station. Hunters use the area to sight their rifles prior to and during hunting season, and some people just drive out to the secluded area and dump trash. -- Roger S. Lucas photo

Clay Hearne and his sons, Ronnie and Kenny, appeal to those using the Osborne Bay gun range to pick up their garbage after they get through sighting their rifles in.

The Hearnes, from Electric City, recently hauled two large pickup loads of garbage from the site.

Included in the trash were cardboard boxes, burned up mattresses, bottles, cans, a muffler and tailpipe and scores of shotgun shells.

Clay said the place is a mess and people should pack out items they bring in. It is apparent that people are also using it as a dump site, so it isn't just those sighting their guns that are responsible.

There are still pieces of cardboard, paper and other foreign objects in the general area.

The shooting range area is within the city limits of Electric City and owned by the Bureau of Reclamation. The site has been traditionally used as a shooting range and city and police have allowed it to continue.