Bear a bigger problem than usual 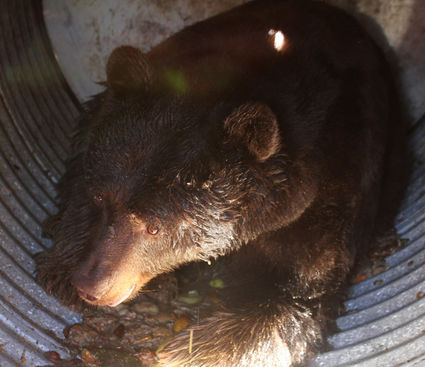 There seems to be an unusual amount of black bear in the area this year.

Two were shot in Coulee Dam recently by Tribal Natural Resource officers, after residents there were bothered by them roaming the streets.

A bear was trapped this week in the orchard at Shaw's Fruit and Produce, the fifth this year at that Belvedere orchard, tribal officer Rick Desautel noted.

"That bear must have weighed over 300 pounds," Desautel stated.

Orchard co-owner Donna Hamilton said that tribal officers came with a culvert-like trap, caught the bear and took it someplace away from the area. She said she thought they were all different bears. Hamilton stated that there have been more bear in the orchard this year than last year.

Desautel said Tuesday that bear trapped are taken as far away as possible and released. Bear trapped in the eastern part of the reservation are released on the west side.

Likely the upturn in the number of bear visiting the area is due in some part to the huge wildfires last year that resulted in loss of the bears' food supply.

"The bear are putting on fat now because in a couple of weeks the food supply will be gone, and then (they) will den up," Desautel said.

He has trapped 15 animals so far this year. "Thirteen of them have been in the past few weeks," he noted.

If the food supply doesn't help the bear put on enough fat, then they will be out of their dens early next spring, he noted.

Meanwhile, look for more bear sightings for the next couple of weeks.