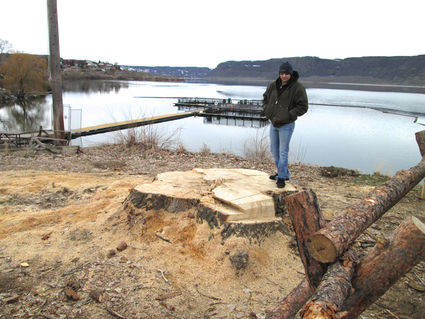 Kevin Heeb stands on the stump left after the Bureau of Reclamation cut down a 100-year-old tree in which American Bald Eagles used to roost. — Roger S. Lucas photos

A 100-year-old cottonwood tree on Banks Lake whose branches attracted as many as 10 eagles at a time is no more, cut down by the Bureau of Reclamation a couple of weeks ago.

While Bureau employees said the tree was rotten, the stump, at least five feet across, shows no sign of rot. Several other nearby trees also cut down had rotted in the center.

“We would watch the eagles fly from the tree to scoop up fish in the lake by the hour,” said Lela Haydock, who lives nearby and had enjoyed the shade of the huge tree.

The Bureau rolled in and cut several huge trees down and put up a pole fence that winds its way around the fish pen area in Electric City.

Efforts to reach Bureau of Reclamation officials in Ephrata were unsuccessful. Calls were referred to Stephanie Utter who was said to be out of town for a meeting. The bureau crew operated out of its Ephrata office, which is in charge of the Columbia Basin Project, including Banks Lake.

“The poplar trees and the huge cottonwood tree were there when our family moved to the spot, (which) it still enjoys on the banks of the lake, back in 1941,” Haydock stated.

Renter Kevin Heeb also had concerns about the fence and tree cutting. Heeb lives in an old trailer beside Haydock’s home and rents from her.

Bureau property, he says — and Haydock agrees — goes right through the old trailer. “From the kitchen on,” Heeb said, “the trailer is on Bureau property.”

“We were given permission to put the trailer there a long time ago,” Haydock explained, “and I think the bureau decided to put the fence in because Kevin had collected a lot of driftwood and stuff around the trailer.”

If the bureau were to place its makeshift fence on its property line, it would likely wipe out the road that people who live in that area use to get to their houses. Most of the residents there live in small trailers.

“No one came by to talk to me about the fence or trees,” Haydock said.

She recalls one winter when a bunch of mud hens got frozen in the ice on the lake and an eagle would swoop down for a meal, leaving only the smaller birds’ feet still in the ice.

Heeb, whose trailer has a waterfront location, said the next step probably will be that the trailer will have to be moved. He has rented from Haydock for about a year and a half. 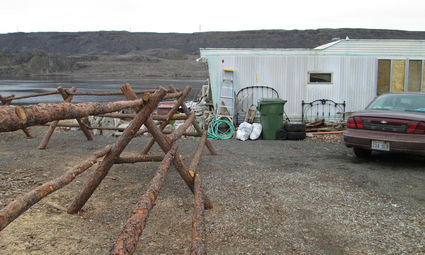 A pole fence erected in the three-day project skirts by Heeb’s rented trailer but would probably cut through the window if it followed the actual property line.

The bureau cut down at least three poplar trees, the cottonwood, and some fruit trees.

Haydock said her family came to the area from Oklahoma when it was chased out by the “dust bowl” storms and the Great Depression.

“We headed here with charged groceries and eight in an old car,” she said.

She takes no issue with the bureau, but wonders why someone from the bureau crew didn’t come by and notify her.

The massive cottonwood tree had supplied afternoon shade for both Heeb and Haydock. Now there’s nothing to protect their homes from the hot summer sun.

“They cut the trees down and then brought in three loads of poles to build the fence,” Heeb stated.

Heeb counted the annual growth rings in the cottonwood stump and claims about 106 rings. A neighbor in the area said it took the bureau crew of eight or nine workers three days to do the work.

I know it’s just a tree, but there is something so sad about the killing of a tree that big! I remember fishing under those trees as a kid and watching the eagles. 'Rotten' or not, that area will never look the same again... Love the 'fence' that the Bureau put up! How many trees were killed to make that mess? How many thousands of dollars were wasted on something that will eventually rot away and get vandalized? I hope they intend on planting something to replace them, not only for the people who live there, but for the wildlife that used the trees for several decades!