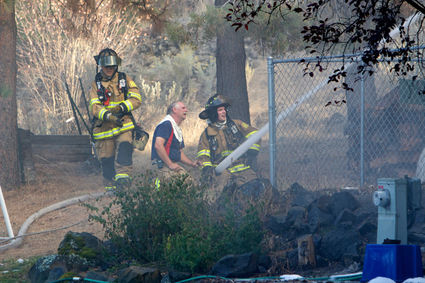 Fire officials said the home at 57789 Cardinal Place NE was a total loss.

One fire official, Carl Sheehy, a captain of the Electric City Fire Department, said it appeared that the fire started in the crawl space under the house and was probably electrical in nature.

The house, owned by Linda Ayotte, of Spokane, was in the process of being sold.

Sheehy said the only thing salvaged by firefighters was the carport and a pickup that was there.

By the time firefighters started fighting the blaze, he said, the fire had already gone up through the walls to the attic.

The call on the fire came in about 4 p.m. and engines from Grand Coulee, the Bureau of Reclamation and Electric City responded.