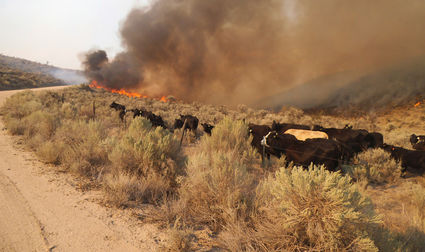 Cattle crowd the fence line as fire sweeps through a sagebrush and grass pasture area on the Jim and Michelle Hemmer ranch that was in line with the Leahy fire last week. The Hemmers lost several head of cattle and about 90 percent of their 20,000 acres of pasture. — Lennae Hemmer photo

The Leahy fire is essentially out, but ranchers will be dealing with the effects of it for a long time.

One ranch family, Jim and Michelle Hemmer, whose 20,000-acre pastureland was essentially blackened, are trying to deal with the problems the fire caused, one day at a time.

They took some time Friday to show a reporter the results of the fire that started from lightning Sept. 9 and consumed more than 91,000 acres in what came to be named the Barker Canyon Complex, most of it in high ranch land bordered by the Columbia River and highway 174 in northeastern Douglas County.

The Hemmers lost almost all their pastureland, and at the top of their list is how to take care of their herd of some 350 cows.

That has been complicated by a number of cows that died in the fire and some that were so traumatized that they had to be put down. The loss of the cows is a tragedy now, and a major loss to the herd next year since the cows were all carrying calves.

“Every cow is personal,” Jim says as he tries to organize his mind on what to do next. “I know they are a commodity, but to Michelle and I they are very personal.”

The Hemmers lost about a half dozen by fire and had to put several more down. The exact number lost will likely take a while to determine.

The fire moved so fast through the ranches up on top, that it was a miracle that only a few structures burned.

“My place was saved because I had my own fire equipment,” Jim notes. “We saved our winter’s hay, thanks to hard work by a number of family members and friends.”

“The fire came rolling over the hills, skipping 30 to 40 yards at a time,” he recalls. “The cows raced to find some kind of shelter and several settled in small, green patches of vegetation.”

Hemmer makes a mental list of what he needs to do next, only to find new pressing problems overshadowing the list.

While the winter supply of hay, almost 1,000 tons, was saved from fire that came right up to the stacks, the cows still need feed between now and when snow flies. The pasturelands that supplied that feed are now essentially gone, and Hemmer has spent hours on the phone trying to buy hay from any source. Hay prices were going at $140 a ton, and some came in from friends and neighbors.

Michelle is on a four-wheeler, loaned to them by a neighbor who knew they needed it, looking over the cattle to see what kind of shape they were in. She carries a rifle in case she finds a cow that has been scorched from the fire and heat that will need to be put down. The heat was so intense that it melted the plastic tags in some cows’ ears.

On the Hemmers’ long list is fencing. “We have about 100 miles of fencing,” Jim states. “I doubt if we have a single corner post standing” The Hemmers will have to trace all the various fencelines, replace needed posts, tighten and, in some cases, replace wire.

Through it all, Jim and Michelle have nothing but praise for the neighbors and friends who lent their support and help. Names like, Dave Winzer, Mick Nachtigal, Wayne Rice, Tom and LeAnn Bates, Rick and Tina Zaldivar, Allen and Mike Lachner, Allen Miller and his hired hand, Ryan Poe; and Dean Thompson, from Almira, who brought their two fire trucks to help. All were instrumental in saving a lot of structures and animals, according to the Hemmers.

The Hemmers, who are celebrating their 30th wedding anniversary, had planned to spend a few days in Spokane. That’s history now.

Some of the losses could have been avoided had fire authorities devoted equipment to specific places, Hemmer says.

“We had our own, and with the added equipment provided by our friends in the Almira area, we saved a lot,” he says.

“All of us are in the same boat,” he adds. “But the fire shows how friends and neighbors respond to those who have a need.”