Firefighters take a stand between home and hell 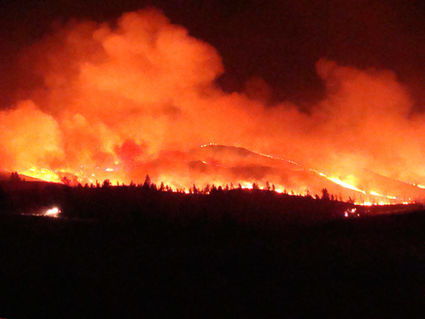 The light at lower left is the porch light of the Green home, where firefighters braced to save the home.

During the third inning of the Mariner’s game on Aug. 14, we saw smoke coming from the north of our home on Peter Dan Creek. We thought the fire was somewhere around Rebecca Lake, but within minutes flames were coming over the hillside North of Peter Dan Road. With the wind blowing from the North, we realized we had better prepare for an evacuation.

Since this is the third fire at our home, we had preparation down to an art form. Larry gathered up the cows, opened gates, saddled up his horse, put her in the horse trailer and put the sprinklers on the house. I had all my keepsakes and belongings in one place, easy to take to the pickup. Within 20 minutes we were prepared to leave, if necessary.

While we were loading up, Larry’s brother, Ray, arrived with his Cat, and quickly put trails around the house and outbuilding in hopes of stopping the flames. By this time they were whipped by gale force winds and coming directly at our place.

Fire rigs began arriving, coming down our driveway one after the other, red lights flashing. Even the Grand Coulee ambulance was here. It was very dark except for the fire and the flashing strobes, the wind was howling through the trees, and we realized that once again we were no longer in charge of our future. We were told we had to leave, and at 11:40 we quickly loaded the three dogs and one cat into the pickup and drove away.

We left our home, barns and haystacks at the mercy of the fire, but in the competent hands of the local volunteer firefighters who are trained to defend structures.

We parked in a driveway above our home and watched as the fire sent wave after wave of flames up the canyon and across the flats. It settled on old trees that had been downed by the Elmer City fire in 2004 and flew on by, leaving the logs burning as it made its way south toward our cattle feedlot and larger haystacks. Once again, three of our favorite firefighters saved the backbone of our livelihood. Our son, grandson, and brother managed to get lines around the stacks and the lot. No watching thousands of dollars worth of hay burn THIS fire, as happened in 2004.

Before we were told to evacuate, we had many offers of help and places to stay. People are so thoughtful and kindhearted. However, we had a pickup and horse trailer with a horse and blind calf in it and a pickup full of the dogs and the cat. And so we said “thanks” and became nomads. We were able to drive around to the east of our place and because of that, we could keep track of where the fire and flames were headed.

From our vantage point above our house, we could tell by the porch light that the house had been saved, but we didn’t know about our other buildings. We watched as “things” blew up into fire and wondered if it was the kid’s old fort or the chicken house. At 4:45 we returned home, and with the dawn, found everything as we had left it. As happened with the last two fires, the structure crew had kept our home safe. What a fine bunch and what a risky task.

The above picture shows a little light in the lower right corner and it is the porch light at the home of Larry and Gaylene Green. This is our driveway where the volunteer firefighters were parked. Behind that is Hell. The firefighter’s job is to stand between your possessions and the hell that is a wildfire. In the process, they have to wear hot, heavy equipment; they must breathe soot, ash, and smoke and deal with the darkness and heat of the fire. Factored into that is the noise the fire creates and the firemen’s concern for the safety of their crew. When you consider how many structure crews were out on the night of August 14th, it puts into perspective the danger of their job. There really aren’t enough “thank you’s” to go around.

Now we begin fixing fences, finding pasture, cleaning rugs, curtains and blinds, while the cleanup crews work in the canyon to finish the task of putting out the fire. So many helping hands for which we are so thankful.