Firefighters save many homes from big wildfire 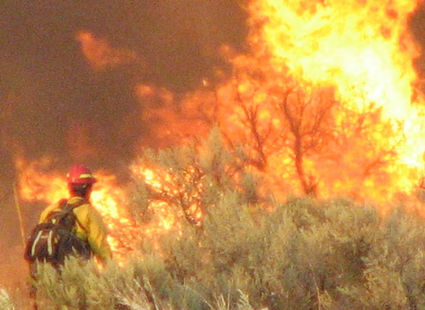 A firefighter backburns brush at the edge of Coulee Dam.

A wildfire that broke out Tuesday evening scorched thousands of acres of brush and timber and two barns -- but no homes, thanks to the quick response of local fire districts working together.

During the night, high winds would spread the fire at a fast pace with winds this reporter estimated at 20-30 mph at 1:30 a.m. Wednesday. One firefighter said gusts of up to 60 mph were measured at the fire in the hills of the Colville Reservation above Elmer City and Grand Coulee Dam.

Occupants of homes closest to the uphill town limits of Coulee Dam and Elmer City were told to get ready to evacuate. And three residences near Buffalo Lake Road were evacuated.

One of those homes belonged to Larry and Gaylene Green, whose first-person story of evacuation is featured on this page.

The next day, many more homes would be threatened.

Brett Black, who lives near the bottom Peter Dan Road, said he and his family had gotten ready to leave as instructed, but at 9:30, he had looked up the hill and figured it was safe; he could leave for his morning meeting already scheduled.

“It didn’t look like imminent danger,” he recalled. But then conditions changed, and looking up he and his wife, Shelley, realized, “this is going to get here before we realize it,” he said. “It literally was a matter of minutes.”

As the Black family was leaving their home, Bubba Egbert and Dan Cavadini, coming down the hill in a Douglas County Fire engine on the way to another place, spotted the fire that had turned toward the Black house, drove down the driveway and prepared to meet the blaze. Elmer City’s Okanogan County Fire District 2 Fire Chief Dave Finch joined them, driving his own vehicle, Black noted.

The fire burned to the edge of the property, but the firefighters kept if from advancing further.

Similars scenes would be repeated in Elmer City and Coulee Dam later that day.

“In my opinion, (local firefighters) did a phenomenal job of protecting … hundreds of houses,” said Type II Team Operations Chief Carrie Stevens. “They should be commended for the excellent job they did.”

Stevens, updating members at a Grand Coulee Dam Area Chamber of Commerce luncheon Thursday, noted that her incident management team had just taken command that morning, and had only arrived Wednesday night as the fire was headed in three different directions and threatening homes.

Under the “Incident Command System” more than 250 firefighters from local fire departments worked together, coordinated by Bureau of Indian Affairs’ Mt. Tolman Fire Control Center until the state Incident Management Team arrived. Most, if not all, local fire fighting agencies were involved. 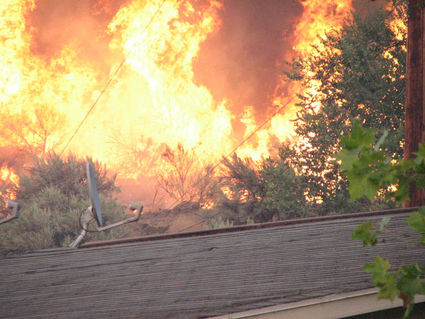 Fire burns on the hillside just beyond a Coulee Dam roof.

The fire, attributed to lightning five days earlier, burned 11,299 acres before it was declared 100-percent contained on Sunday. Still smoldering in spots, it may not be considered completely “out” until winter.

No homes were lost. Two minor injuries were reported.

“Firefighters and public safety officials from several jurisdictions worked together in an extraordinary effort that ultimately helped save the lives and property of people in the path of the blaze,” Coville Business Council Chairman John Sirois said in a statement. “This was an excellent example how we can work together in an emergency situation to protect our citizens and our communities.

“We are grateful for the efforts of everyone, from every agency, who did their utmost to assure that this destructive wildfire caused no significant losses of property or life …” he said. “Lim limt--thank you all very much.”