Fire out of control above towns 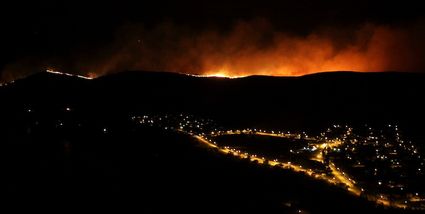 As seen from Crown Point, the fire rages above Coulee Dam and Elmer City.

A wildfire burning out of control in the hills above the towns of Coulee Dam and Elmer City has consumed hundreds of acres of sage and grassland and reportedly forced some homeowners to evacuate as a precaution.

The fire started Tuesday evening and by midnight looked like a long string of hellish pearls at the top of the ridge above the two towns.

Police were reportedly telling residents of Tilmus and Central streets, closest to the hillside in east Coulee Dam, to be ready should they need to evacuate.

Authorities could not be reached, but the fire stretches for miles and has consumed hundreds of acres, at least.