Storm rips through the region 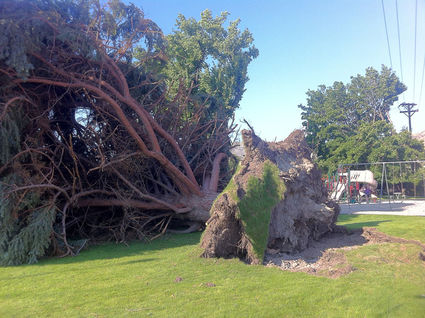 A big spruce tree torn out of the ground in Mason City park dwarfs a child on a swing Sunday. — Scott Hunter photo

People that have been around the area for a long time said last Friday afternoon’s storm was the worst they had ever seen.

A National Weather Service warning at 12:54 p.m. said it was moving north through Grant County at about 30 miles per hour. The warning was issued until 1:45, but the storm hit the Grand Coulee Dam area with force about 3 p.m.

In its wake, there were many reports of upended trees and roof damage, and the driving rain kept people indoors for the half hour or so of the storm.

The heaviest of damage occurred on the Colville Indian Reservation, notably along the San Poil River and Keller area where wind bursts may have exceeded 100 miles an hour.

Sirois said Tuesday that the Colville Tribes had suffered $5 million damage to timber, roads and other tribal government property. More than 40 miles of power lines were destroyed in the storm.

“This catastrophic event swept through the area in only a few hours, yet caused enormous destruction,” Sirois said. “Luckily, no lives were lost on the reservation, but we know that dozens of people were displaced from their homes, particularly in the Keller area, and emergency shelters and services are being provided for them.”

The weather event, just after 3 p.m. Friday afternoon, carried wind gusts powerful enough to lay down whole tracts of timber, and there was wind damage in Ferry County all the way to the Canadian border.

Reports of power outages, road damage, trees being down, were all confirmed by Bill Elliott, of the Colville Tribes’ public safety department.

“Everybody came together to work for a common cause,” he said. “The professionalism and quick response was instrumental in mitigating the harm the storm caused.”

Sirois stated that emergency crews, police and EMTs had immediately been deployed to “aid the elderly and isolated populations.”

Through the emergency declaration, the tribes requested all available assistance from federal, or state emergency services.

Power was knocked out for some 2,500 homes in Ferry County alone and the state made access available to Basic Food benefits, cash and medical benefits. It was estimated that power would be out for some for several days. Hundreds of power poles were down. Tuesday afternoon officials said that of 1,000 miles of powerlines, about 300 miles were operational, including for 40 percent of the 3,500 customers of the Ferry County PUD. Most power was restored in Republic and Keller, but restoring outlying areas will take longer, they said.

A 12-member incident management team and other support personnel were sent to the Ferry County area. The Red Cross established a command center at the Keller Community Center and at Republic High School. The state Emergency Operations Center at Camp Murray said the state had coordinated a mobile laundry unit vendor for Keller, and mental health support services had been deployed to the tribes.

Other areas in Inchelium, Nespelem and Omak, have also suffered significant damage to roadways, and downed trees slowed or stopped traffic in some areas.

One of the large yellow cranes on top of Grand Coulee Dam was moved several hundred feet by the wind, jumped its tracks and damaging a contractor’s vehicles. Bureau of Reclamation Public Affairs Officer Lynne Brougher said that a contractor had been working on the crane and the brakes were disassembled, but the crane had a wedge on one wheel and had been anchored by a cable. The cable broke allowing the 275-ton crane to move.

The large cranes have a capacity to lift 325 tons and weigh 550,000 pounds. Brougher said when workers move the crane, it travels at about 2 mph, but that when the wind caught the crane it was estimated it was traveling at 20 mph.

Brougher said there was some damage to the crane and the north wall where the crane was stopped. She said it was a “very unusual occurrence.”

Bob Valen, who writes a weather column for The Star, said his home weather station showed wind gusts at 40 mph, and a half inch of rain fell in less than an hour. 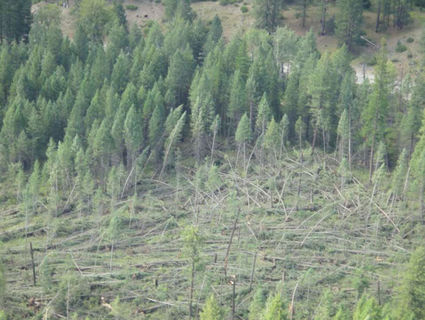 A swath of trees lies on the ground on the Colville Indian Reservation. Colville Tribes photo

Larry Jacobson, who lives in the Spring Canyon area, said a wind gauge at his house showed 83 mph.

In Electric City, trees were down. On Sunset Drive, James Depew lost a large evergreen which fell into Clark Perman’s yard, narrowly missing his house.

On Pearl Avenue, one resident lost two aspen trees that fell on the roof and a number of composition shingles came off the roof. On Gold Avenue a tree was down. City crews were immediately out cleaning up debris off the streets.

Grand Coulee fared better than other towns. City hall said there were no reports of downed trees or major damage.

In Coulee Dam, a large spruce tree was uprooted at Mason City Park. Another tree was down behind the Community Presbyterian Church and a large evergreen was blown over on Holly Street. A downed tree on River Drive had to be cleared to get traffic moving again.