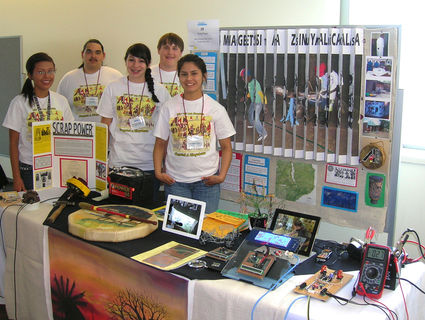 Rickyna Sam, Abe Batten, Amanda Palmer, Andrew McClure and Tanecia Stanczak with their display at Imagine Tomorrow. Their project, entered in the Behavior division of the competition aimed at tackling energy problems, drew parallels between the culture in Malawi and on the Colville Indian Reservation. — Ralph Rise photo

The “Scrap Power” team from LR took the Global Impact award and fourth place in their division. Each student got Microsoft software and $250. The prize to LRHS was $1,000.

The team has been working after school throughout most of the school year to tackle a problem half a world away with very local ties.

Students Tanecia Stanczak, Rickyna Sam, Amanda Palmer, Abe Batten and Andrew McClure worked with volunteer mentors Ralph Rise, Lee Largent and Frank Ayers to figure out how to help a priest in a region of Africa without electricity charge batteries to power a small keyboard for music.

Rise’s daughter married Gerald Macheso from Malawi, one of the poorest countries in the world.

Gerald’s best childhood friend is now the lone priest for 22,000 people in 13 parishes in Malawi. There is no electric grid at all, so when Father Paul needs to recharge the batteries for the little keyboard someone donated, he has to find a diesel generator somewhere. Father Paul visited Rise last summer and was amazed that electricity was everywhere in the house.

The challenge: find a way for people in such a remote place to charge a battery with a solution that costs under $10, using a device they can put together from materials found in Malawi, where average income is $24 a month per person.

The “Scrap Power” team’s solution involved an old single-speed bicycle, a common car alternator and triumph over a physics problem using some pretty savy tech, including electronics the team employed in a new way.

“One of the judges said he’d seen lots of these bike alternators but this is the first one that ever worked,” Rise said Tuesday.

That’s what the team found in their research. You can’t charge a battery with such a device until you’re pedaling that bike really hard at an unsustainable rate.

Using scavenged parts and circuit boards they made themselves, the team devised computer chips that control the work and break it down into tiny bits of work thousands of times a second. Even a little kid can charge a battery now, although taking longer than it would an athlete. And Father Paul knows lots of kids, big and small. 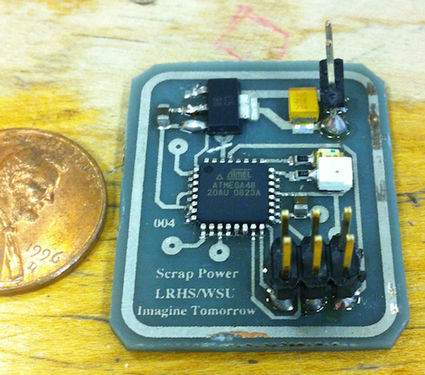 One of the team’s hand made computer chips

“We’re taking advantage of the fact that the smarts are cheap and fit in a shoe box,” explains retired LR teacher Ayers, the technician of the team. He joined the effort in February and “donated his life” to it since then, Rise said.

To devise the solution, the students had to do real science, experimenting with numbers of coil windings and other factors to learn optimal combinations. Their system includes custom-made (from scrap) small computer chips: a switch mode power supply and a smart voltage regulator computer that controls field current to allow control of how hard you have to pedal.

“What we have here is not on the market,” Rise said.

The result: 10 minutes of pedaling can yield about an hour of keyboard music. And an academic team from LRHS has distinguished itself in a highly competitive, multi-state competition.