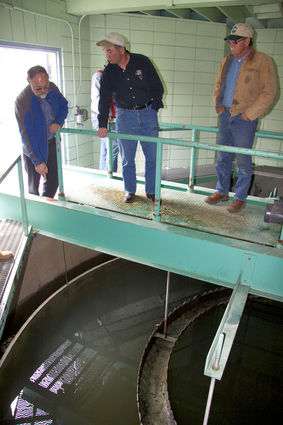 Discussions were polite but initially tense as Elmer City officials met with their Coulee Dam counterparts Friday at Elmer City Hall on proposed sewer plant upgrades that both towns would pay for.

“What we want to know is, are we a partner or are we a customer?” said Elmer City Councilmember Larry Holford. He said they’d hired a lawyer to find out.

The legal question stems from a 50-year interlocal contract that appears to give Coulee Dam the power to make maintenance decisions on its own and charge Elmer City proportionally by the volume they send through the plant.

So Elmer City is now faced with 25 percent of a planned $6.2 million upgrade to the wastewater treatment facility that serves both towns.

Aside from mayors and council members, each town’s head of maintenance attended, as well as engineers from Gray and Osborne, the Yakima firm hired to design the upgrades.

Elmer City Mayor Mary Jo Carey also pressed on the customer/partner question, but asked why other sources of funding had not been sought, namely the Colville Tribes and the Indian Health Service, which recently helped Elmer City with a water project.

Coulee Dam Mayor Quincy Snow said he had written to them, but had received no response.

“They said they were never approached,” Carey responded.

Engineer David VanCleve said the planning progression has taken nine years so far, and Coulee Dam city officials have been presented with options along the way.

DeWinkler said it would have been better if Elmer City had been consulted, too, because they might have decided to build their own plant.

The meeting broke up to get a first-hand tour of the plant in question.

“I think you’ll see as we go through this,” said Coulee Dam Councilmember Karl Hjorton, “that we’re not trying to build some kind of Cadillac.”

Elmer City is waiting on a legal opinion.

There was absolutely no reason for the Friday, May 4, workshop at Elmer City to be closed. Oh wait. Maybe the reason was to have no public input. Since Elmer City has rarely closed a meeting I decided to go. After listening to the presentation, I'm glad I finally read one of Greg Wilder's letters and I'm relieved to hear Elmer City has hired an attorney. I was at the 2004 meeting with the power point presentation by Coulee Dam's big projects engineering firm. The general consensus from the audience was, if it isn't broke don't fix it. Then it generated into a general complaint session about sewage backing up into homes. I could not understand why Elmer City's mayor and two council persons were even invited. There may have been a 2008 presentation, but I don't recall it. Please continue Mr. Wilder's comments. Without them we would have no information. I wonder how many Coulee Dam and Elmer City area residents are aware of the 18% tax collected by the Town of Coulee Dam on their sewer bill? Elmer City has no such tax on it's residents, but my friends in Coulee Dam pay 18% tax on their water and sewer and 6% on their electricity. This money goes directly into the Coulee Dam coffers. It is my understanding the Town of Elmer City owns their sewer collection system and is part owner in the treatment facility equipment. Elmer City should not be taxed as a Coulee Dam utility. Paying attention, Gail Morin