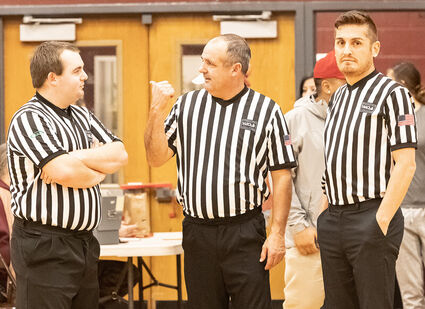 Sporting officials and umpires are in short supply locally, and the association that schedules those workers is looking for interested people to fill the roles that keep sports going.

"We currently do not have enough umpires to cover all games with two umpires," he said. "On some days we are unable to cover games at all sites, resulting in schedule changes or cancellations. We need new umpires!"

"Every sport is looking for officials," said Brian Schorzman, the referee at the games. "You can referee football, basketball, volleyball; umpire baseball, softball - they'll take you."

He said he'll likely stay at his usual 80-90 games a season this year.

But Kaedin Schorzman, an umpire at the Raider games, said he's already at 75 games halfway through this basketball season. He said he used to average 70 games in a season when he started the job five years ago.

The Schorzmans are from Odessa.

Warren Medina, the other umpire at the games Friday, from Moses Lake, has been officiating for 20 years. He estimated he's already worked 90-100 games this year so far.

"You're going to get at least $100" on an average night, Kaedin said. And mileage is reimbursed.

Nevertheless, younger officials recruited can get burned out due to the intensity of some overzealous fans, Brian said.

"They think it's a championship game" at every event, he said. And young officials "are trying to learn, just like the JV kids are trying to learn. It's a learning atmosphere for everybody." But fan abuse "pushes those young people out."

"If you would like to join our group to help keep scholastic baseball/softball alive the CCBUA would like you to join us," Sheilds' press release continued. "Game fees have been raised by $15.00 per game this year and you are paid within 72 hours. Our group will help you financially to join by helping you obtain the equipment need to umpire. We also train you in the rules and methods of umpiring each sport. We would like to add both women and men to our group who love the game and would like to give back."

The association will hold its first meeting of the 2023 season on Jan. 30 at 6:45 p.m. at Ephrata High School. A notice on the door will have the room number.