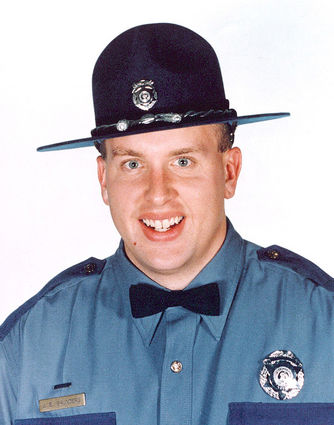 As part of its Centennial Year Celebration, the Washington State Patrol has been offering information on each of the 30 individuals at the patrol who have lost their lives in the line of duty, including Jim Saunders, who was assigned to Grand Coulee right after completing his basic training in 1991. Here is his story:

Washington State Patrol Trooper James E. Saunders lived life large, both in stature and in heart. Beloved by those who knew him for his sense of humor and selfless nature, the husband and father was tragically killed while conducting a traffic stop in 1999.

Saunders was born Aug. 2, 1968, to John and Jan Saunders in Clarkston, Washington. The family moved to Leavenworth where he later graduated from Cascade High School in 1986. Saunders received an associate of arts degree from Wenatchee Valley College in 1988 and a Bachelor of Arts degree in political sciences from Whitworth College in 1990.

His law enforcement career began Jan. 7, 1991, with the Washington State Patrol as a trooper cadet assigned to the Governor's Mansion Security detail. Saunders joined the 73rd Trooper Basic Training Class and was commissioned on Dec. 20, 1991, then assigned to Grand Coulee.

Saunders married the love of his life, Billie Mattson (daughter of Bill and Stacia Mattson of Grand Coulee), on June 19, 1993. Three years later, the young couple transferred to Kennewick and started their family. At the time of Saunders' death, he had a 2 ½ year old daughter named Megan and Billie was five months pregnant with their son.

The nine-year trooper conducted a traffic stop at around 9 p.m. on Oct. 7, 1999, on West Lewis Street just off Highway 395 in Pasco. Saunders stopped a green 1992 Mazda pickup whose driver, investigators later learned, was a convicted felon out on bail for a pending cocaine delivery charge.

Saunders called out his traffic stop, including the vehicle description and plate - the last words anyone heard him speak. A minute later, a citizen picked up Saunders' radio and told WSP Communications the trooper was shot and gravely injured. The pickup had fled the scene.

The fleeing driver was later found after an intensive 26-hour search. Investigators found the pickup truck and were able to locate the driver's and Saunders' fingerprints on the vehicle. The driver plead guilty to aggravated first-degree murder and is serving a life sentence at the Washington State Penitentiary in Walla Walla.

After his death, his young family remained close to the WSP, with daughter Megan eventually beginning her own career in law enforcement as a communications specialist with the Washington State Patrol. Her drive, enthusiasm, and accomplishments made her a winning candidate for employment in a competitive industry. Megan currently works for the Washington State Criminal Justice Training Commission in Burien. Young Jim is a junior at the University of Washington as an Economics major. They are both thriving young adults and honor their father's memory with their accomplishments.

The Washington State Patrol will always remember Trooper James E. Saunders, his service, dedication and ultimate sacrifice. His sacrifice would be the 26th of 30 during the agency's first 100 years of service to the state of Washington.