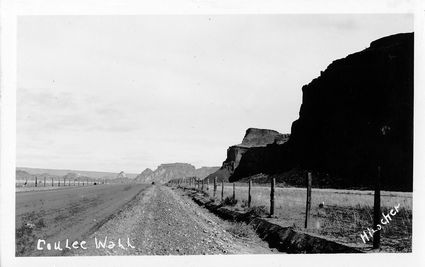 At first when the Colville Reservation was formed in 1872, there was a paranoia from the lawmakers in the east that an attack would come from across the Columbia River by Seaton's Landing. To keep an eye on things, the U.S. Government sent out two decorated Indian War veterans, Len and Sam Dillman. When they arrived in the Grand Coulee, they set up base close to Rattlesnake Canyon, but pretty soon purchased the orchard at the bottom of the canyon.

When it became apparent the attack would never happen, Sam married and moved down to Woodchoppers Spring on the north side of Steamboat Rock. After several years alone in Rattlesnake Canyon, Len sold his property and moved south, where he raised goats on his brother's land. Woodchoppers Spring was in the vicinity of Northrup Canyon, where Len's sister, Caty Northrup, lived. Len was there on the day that Caty was murdered c.1903, and one of the last people she talked to.

It wasn't long after that when Len Dillman moved further south to Payne Gulch, an old man. He refused to be broken by past experience and became known as the Optimistic Bachelor, fondly remembered years after his death.