History of the Keller Ferry 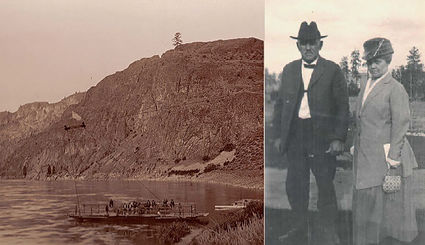 John Christopher (J.C.) Keller was born in Cincinnati, Ohio, October 16, 1858, and came west in 1882. He conducted the post office and a general store at Hesseltine, northwest of Wilbur and when the railroad was built to Davenport, Keller moved to Almira and opened a mercantile store.

In 1897, anticipation of the opening of the Colville Reservation south half to mineral entry, prompted him to buy the cable ferry across the Columbia to the San Poil, which then became known as the Keller Ferry. He opened a store near there the next year. He ran a pack train up the San Poil River and later built a road along the river from the Columbia to Republic.

He owned the ferry until Ferry County took over on Dec. 9, 1926, after which he moved to Spokane, where he died April 25, 1929. His daughter, Lula, married my father's cousin, Gordon Poston.

My maternal grandfather, Tom Seaton, conducted the Hesseltine post office and store for a few years after he came west from Missouri in 1889, and moved down to Plum to start his ferry about 1897, also because of the South Half opening.