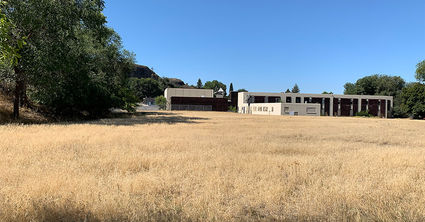 Center School, as seen from the back side near Martin Road, offers a lot of space for development. - Jacob Wagner photo

After a long process of crossing the t's and dotting i's, the sale of Center School has finally closed and its new owners are developing plans.

The former school on Spokane Way in Grand Coulee was sold by the Grand Coulee Dam School District to Centerline Development, a company co-founded by local men Nic Alexander and Ian Turner, for $155,000.

The 8.3-acre property has a lot of potential, Alexander told The Star. He and Turner are envisioning various kinds of quality housing.

"We're super excited about it, and we have an architect on board," Alexander said.

Centerline Development has a lot to work with - the school building itself and the plateau above the school, as well as what they refer to as the playfield.

"We're letting community need drive how we break the property up and proceed with various types of uses," Ian Turner told The Star. "We'll be talking to a lot of individuals around the community. We've heard different ideas and requests from people who would love to see certain things that they are willing to be a part of."

Turner said that during the upcoming fall and winter months they will be focused on developing their vision for the property and deciding what would benefit the community the most.

On the plateau, Alexander said they may build single family homes.

"Some people are interested in a lot up there with a great view of the dam," Alexander said.

Townhouses on the playfield, tiny home-like cottages, and senior housing are all possibilities Centerline is considering, Alexander said, saying there could be properties to buy or to rent.

"The whole tiny house/cottage house idea has become popular in the past handful of years, maybe not in our area, but it's just kind of a cool idea," Alexander said. "If it works out, we'd like to maybe include it in the development. We don't want to rule anything out."

"What is this property going to look like when we're done?" Alexander continued. "We want to have the whole thing planned out before we go through with it," Alexander said. "It'll be exciting for us and the community, I'm sure."

Alexander also said there could be a road connecting Martin Road to the development, cul de sacs, and more, but reiterated that they are just in the planning phase for now.

Terms for the sale had been agreed upon in February of 2018, with the paperwork taking longer than expected, and the sale closing on Aug. 9, 2019, about 18 months later.