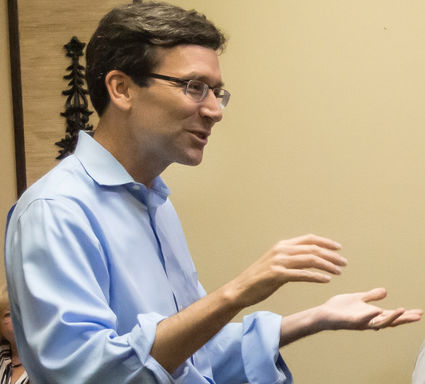 Attorney General Bob Ferguson explains what his office of about 1,000 state employees does to Rotarians and others in Grand Coulee.

The man who leads the state's legal bureaucracy, basically the state's own law firm, told an audience in Grand Coulee last week that the smaller part of their work gets the most headlines, but costs taxpayers nothing.

That's because that part of the Attorney General's Office that takes others to court - actually sues other agencies or private companies - is in essence a state-owned law firm that operates off the settlements or judgments from those suits. But the vast majority of their work is to directly advise state agencies.

The AG's office employs about 1,000 people, including about 600 attorneys. Last month, a group of about 30 of them pulled in a big win on behalf of consumers in the state and a big loss for Comcast, Ferguson said.

The state contended it wasn't right for Comcast to sign up people for a service without their knowledge or consent, then bill them $5 a month for it, Ferguson said, an amount that many consumers consider too little to fight, even if they don't know what it's for or don't want it.

The cable and internet company, he said, had been signing people up for a $4.95-a-month service plan that would cover them if the wiring inside their home didn't work. For that monthly fee, the company would fix those problems, if they ever occurred. Essentially, an insurance plan, he said.

Attorneys in the AG's office found documentation, even voice recordings, showing the company would sign customers onto that service even if they stated they didn't want it, Ferguson said.

A judge ruled that Comcast had violated the state's consumer protection laws 500,000 times, resulting in $10 million in penalties. The judge has yet to decide how much of that will be paid back to consumers in restitution and how much will go to the state, with the Legislature ultimately deciding how to spend it.

Ferguson explained that when they actually go to court, and win, the judge decides on where the money goes. If the case is settled outside of court, Ferguson decides.

Recently, his office has sued several pharmaceutical companies, alleging they pushed opioid prescriptions that have resulted in addiction all over the state.

"Grant County is one of the dozen counties in Washington state where those distributors distributed ... more prescriptions than there are people," he said. "You tell me. I don't think you've got to be an expert in the legal obligations of manufacturers to know that, hey, ... maybe something's not quite right there."

But Ferguson's job is to defend state law, whether he likes it or not. He noted that he is personally opposed to the death penalty, but it's his job to make sure that, as state law, it's upheld in court if challenged.

Upholding state law versus federal policy or even county policy is also his job, he explained. So when several county sheriffs in Washington said they intend not to uphold a law passed last year by initiative that requires background checks for those purchasing semi-automatic rifles, he counseled them against that position because they put their county taxpayers at risk.

"If a background check is not done, and someone buys an AR-15 and something terrible happens in your local school, I guarantee you ... there will be a lawsuit against that law enforcement [agency]. ... They're not paying the money. It's the taxpayers who are paying, AND you've got a tragedy on your hands."