No one spoke against it at informal meeting at Wine Bar 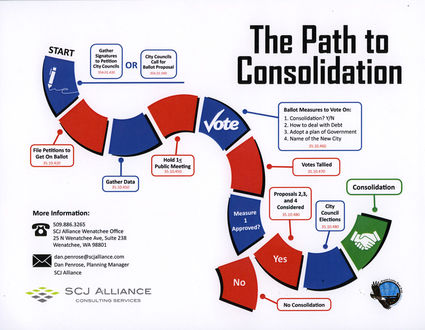 More than 50 people gathered at the Wine Bar in Grand Coulee Thursday to discuss the idea of consolidating some or all local towns into one.

SCJ Alliance, a consulting firm for municipal planning, engineering, transportation and landscape architecture, sent four representatives to attend and lead the discussion, which was organized by the Grand Coulee Dam Area Chamber of Commerce.

The firm's Dan Penrose led most of the discussion and passed out an illustration of the "Path to Consolidation" that outlined the steps that would be followed if the community chose to do so.

He has researched the general question, with some answers provided by state statutes and case law.

It's a rare occurrence. Consolidation of two towns last happened in the state of Washington when Chelan and Lakeside became one in 1957, Penrose noted.

The first step would be either for citizens to gather signatures on a petition or for city councils to call for a ballot proposal. That would be followed by gathering information on specific issues involved, holding public meetings and a vote on four items: whether to consolidate at all, and, if so, how to deal with municipal debt, what kind of city government should be adopted and the name of the new city.

But what would be gained, and is the community ready to move ahead to answer a question that has been raised for decades?

"Are people in this room, are people in your community behind this thing to the extent that it's worth a serious effort?" Penrose asked. "We'd love to be a part of it. ... Is this discussion really ready to happen? ... We've been talking about this for four years."

The firm, which has contracted with at least three of the four cities over the years, was asked years ago what it might cost to help explore the issues. It responded with a proposal of about $30,000.

In 2015, Grand Coulee and Electric City councils each talked about splitting that cost with the other city, but each later pulled out.

Since then, the chamber of commerce has done much of the legwork SCJ would have done, knocking the remaining price down to $15,000-$20,000.

Wade Taylor, a Lake Roosevelt High School graduate and an owner in Taylor Enterprises, which contracts for maintenance jobs at dams and other big projects, said he had invested $2,500 toward the effort and challenged others in the room to help make it happen too. "We know our city councils haven't," he said.

No one spoke against the idea; several spoke in favor of it to applause.

"We're already shrinking as a community," said Jim Keene, a retired school district superintendent, now a port district commissioner, "so we can't even plan on having everything remain the same if we like it the way it is, because it's getting tougher to maintain all of our services. ... It's tough maintaining the duplication."

Greg Behrens noted Grand Coulee and Coulee Dam high schools used to have a fun and healthy rivalry before their merger in 1972. "But we were growing then; we aren't growing now. ... Let's work together now."

The cities do work together on many mutual needs - police, sewer, water - but those are also a source of legal disputes.

"It's kind of like me charging my brother to stay in a spare room in my house," offered Penrose to laughter. "I can do it; it's not that cool."

Johnston said no matter how much study is done, the ultimate benefit of consolidation would be hard to measure beforehand. "There's a lot of potential out there that you will have together in terms of efficiencies and cost savings, as well - you've created a critical mass for other things," he said. Those could include more clout with county and state agencies, or working for better industry growth.

Peggy Nevsimal, the chamber's executive director, said 55 people had attended the meeting and she was a little surprised at the level of support for consolidating more than just Grand Coulee and Electric City.

"The general comments I've heard from many who have stopped in my office since last Thursday are, 'The time is NOW, let's get this done,'" she said Tuesday. 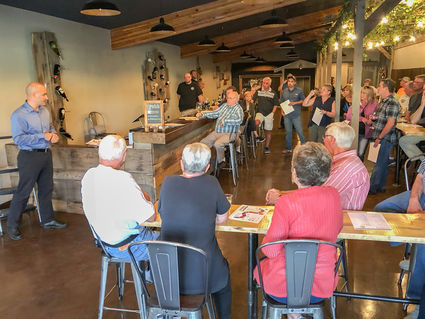