Raiders salvage a win at home, lose in Tonasket 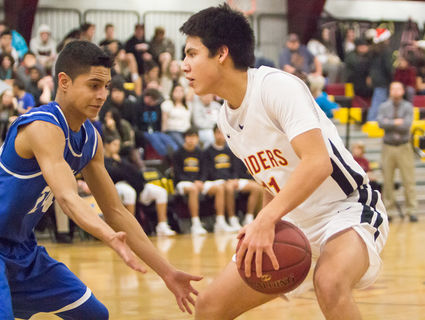 Trevor McCraigie controls the ball against a Trojan in the Raiders' 54-51 victory against Manson, in which McCraigie shot the game-winning three-point shot at the end of the game. - Jacob Wagner photo

The Raiders defeated the Trojans in the final seconds at home before losing to the Tigers in Tonasket last week.

Hosting the Manson Trojans on Dec. 12, the Raiders maintained a lead but almost lost the game in the fourth quarter.

Going into the fourth, LR held a strong 44-32 lead, but the Trojans rallied, tying the game with a three-pointer, 51-51, with one minute and 30 seconds remaining.