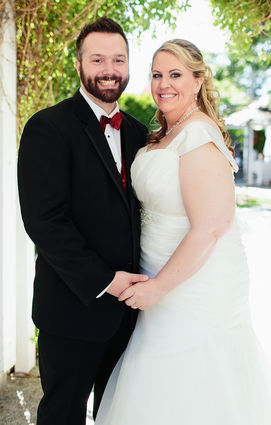 TeriJayne Owen, daughter of Terrence Jay and Deanne Owen of Grand Coulee, Washington and David Samuel Osborne, son of Kendall Joseph and Linda Joy Osborne of Sammamish, Washington, were married on June 13, 2015 in Snohomish, Washington. The Owen-Osborne wedding was held in the historic and beautiful Belle Wedding Chapel with Stephen P. Hall, M.D. acting in the role of minister and officiating the ceremony. Following their wedding and reception, David and T.Jay went on their honeymoon and spent time exploring the San Juan Islands. They have now returned home to Pullman, Washington where they will continue to reside.

This couple's love story started when they met in January of 2009! After fostering a deep friendship, they enjoyed 5 wonderful years of dating that culminated into the best surprise Christmas present ever when David proposed to T.Jay on Christmas morning 2014. Since both are diehard Cougar fans who are also proud to have obtained their Bachelor's degrees from Washington State University, it was no surprise to friends and loved ones when they choose Crimson and Gray as their wedding colors. A local reception was held in Pullman at the WSU Brelsford Visitor's Center at the end of June.

Employed at Healing Hands Massage Clinic, David Osborne, AT-C/L, LMP works as a massage therapist and is also the Director of Education and Co-Founder of Altura College of Massage which opened in Pullman this summer. T.Jay continues to work as the Administrative Assistant and Coordinator of Marketing & Communications at Palouse Medical, where she has been employed since 2007. These newlyweds wish to share their joyous news and are thrilled to begin their happily ever after!