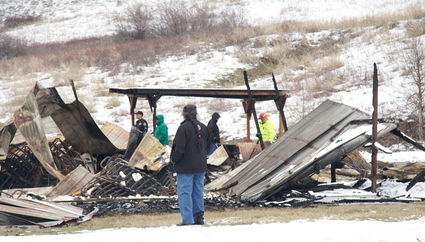 Investigators Friday assess the remains of the Chief Joseph Nez Perce Longhouse, including charred and twisted metal roofing and stackable chairs ruined in the heat of the fire that razed building the day after Christmas. — Scott Hunter photo

An electrical malfunction was named initially as the cause of a fire that destroyed the Nez Perce longhouse south of Nespelem the day after Christmas.

Firefighters responded to a 12:30 a.m. call Dec. 26 and found the structure engulfed in flames. Firefighters arrived minutes after receiving the alarm and the fire was so hot that they couldn’t get close to the structure.

Soy Redthunder, who has been active in the longhouse, said the structure was 70 feet by 80 feet and insured for $350,000.

“I know there hasn’t been any meetings on what we are going to do, but likely will after the first of the year,” Redthunder stated. The longhouse was part of a bicentennial project and was completed by 1975, according to Redthunder.

The building was used for religious gatherings and other important meetings. A number of cultural treasures were lost in the blaze, according to a report of Colville Business Council Chairman John E. Sirois.

“This building was more than a place of worship,” Sirois stated in a press release, “it was a place of giving and a place of teaching and love. Our prayers are with all those families affected and we ask that our heavy hearts are lifted in time.”

The Chief Joseph Nez Perce Longhouse was burned to the ground and early reports stated that efforts to replace the building are underway.

Tribal police and fire officials were investigating the blaze to try to get more specific information on how the fire started.