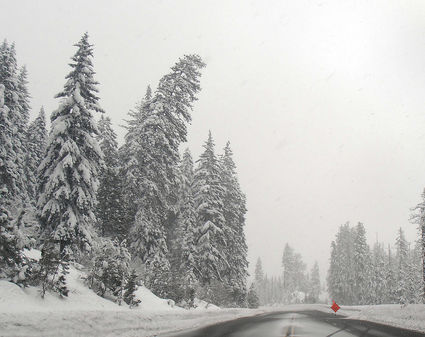 Trees bending toward the US 2 threaten to fall on the roadway, as four more did last night.

With dozens of snow-laden trees still slumped over the highway, the Washington State Department of Transportation is keeping US Highway 2 closed from Stevens Pass to the west end of Leavenworth.

Skiers can still get to the summit from the west side, but cannot continue east toward Leavenworth. Through traffic must detour via US 97 Blewett Pass and Interstate 90 Snoqualmie Pass.

“At least four more large trees crashed to the roadway overnight, and there is no way to estimate a reopening time,” said WSDOT regional administrator Dan Sarles. “Given what has happened at the pass, this is the right decision to make for the safety of drivers and our workers.”

The forecast tonight calls for clear and cold conditions, which means snow will freeze to branches and trees will not be able to shed their snow load. Wednesday’s forecast calls for another 8 inches of snow at Stevens Pass.

If the dangerous conditions continue, WSDOT plans to bring in a large helicopter to attempt blow snow from the trees on Wednesday.

Trees have been falling on cars traveling on state highways, killing two and injuring five people and prompting the closure of U.S. 2 from Leavenworth to Stevens Pass Sunday evening.

Two people died and four were injured about 21 miles west of Leavenworth Friday afternoon at 1:20 when a tree fell on the 1999 Suburban they traveled in. A mile west and about 29 hours later, another tree fell, injuring five people and destroying their 2005 Audi. In Ferry County, 11 miles west of Kettle Falls, a car hit a tree that had fallen onto SR 20, closing the road, according to an initial report from the Washington State Patrol. The WSP has not advised that the highway has re-opened.

US 2 from Stevens Pass at milepost 64 at the summit to milepost 99 at the west end of Leavenworth is closed due to the potential for snow-laden trees to fall onto the roadway, Washington State Department of Transportation reports.

US 2 was closed in both directions at 6:25 p.m., due to fallen trees on the roadway and the potential that other trees may be threatened. The conditions are to be evaluated Sunday morning to determine a reopening strategy.

Motorists will be able to access the Stevens Pass Ski Area from the west, but through-traffic is advised to use I-90 Snoqualmie Pass and US 97 Blewett Pass.

Less than 2 inches of snow fell through the closure zone on Saturday, the DOT said.

The next front is forecast to bring as much as 3 to 4 inches of snow late Sunday morning through the evening. DOT said updates will be provided as details become available.

Killed as their Suburban traveled east on Friday were Timothy Owen, 58, and Cheryl Reed, 56, both of Bothell, the WSP stated. Four passengers, all in their 20s, were taken to Cascade Hospital with injuries.